Many lives were lost during the Normandy invasion. Among the Allies and the Axis troops, but also the collateral damage that occurred in the small villages and towns over and upon which was the battlefield for Europe at that time.

Sometimes historic events and genealogy merge and you find yourself at a crossroads. In this case my own family history with the village of Aunay-sur-Odon, in the French department of Calvados near the Normandy coast. Many centuries ago my mother’s ancestors followed William the Conqueror across the channel to England and later to Ireland, and possibly back to Wales. At some point they made a greater leap and came to America, maybe in the seventeenth or eighteenth centuries. (Regardless, we got here somehow.) 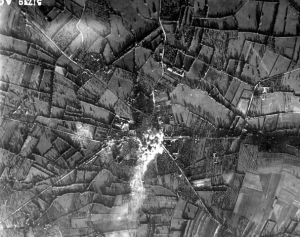 But the real story took place back in the village of Aunay after the June 6, 1944 events of D-Day, as the Allies progressed further into the countryside of Normandy and eventually across France. On June 12th, in the British sector, a decision was made to bombard a strategic crossroads between the towns of Caen and Vire, and Bayeux and Falaise. That crossroad village was Aunay-sur-Odon. The initial bombs were dropped and the village centre was obliterated along with the lives of 100 people.

Aunay after the bombardment. Source: By Reeves (Fg Off): – http://media.iwm.org.uk/iwm/mediaLib//9/media-9416/large.jpgThis is photograph HU 92982 from the collections of the Imperial War Museums., Public Domain, https://commons.wikimedia.org/w/index.php?curid=30877964

Then, a few days later, another decision was handed down that called for the bombardment of the entire surrounding town. On June 14 and through the night into the 15th, the entire town area was barraged. 25 percent of the population was killed.

Undoubtedly, in the crush of events that pushed the invading armies across France to free the enslaved peoples of Europe, the decisions were made quickly and with the full knowledge that collateral damage would happen. The Germans dug themselves in where they could and wanted to keep the roads open for their own defenses. A strategic crossroads was a viable and necessary target for the Allied forces. This is the nature of war.

So, as we remember the sacrifices of the men who died valiantly for their countries, we also need to be reminded that war takes a very real toll on the civilians who are caught in the crossfire, or, in this case, the crossroads. It is always thus, regardless of the conflagration. There is collateral damage, often innocent people, but always those who simply want to stay out of the way but cannot.

War is not always glorious. Mostly, war is death.

EXPERIENCE HISTORY:  If you are interested in the the D-Day invasions and want to experience them as the news reports came to America through the radio broadcasts that day, tune into Conyers Old Time Radio and listen as they broadcast the original recordings from Invasion day. Try to imagine yourself, gathered with your family around the radio, waiting to hear exactly what was happening across the Atlantic Ocean. Imagine that your brother, husband, or, possibly, father was overseas and his life was on the line that day. Imagine also the villagers and people of France as they braced themselves for what was to come in the next few days once the invasion had begun.

If you’ve missed the June 6 broadcast, you can listen to some of the recordings here at Complete Broadcast Day D-Day from Archive.org.

This site uses Akismet to reduce spam. Learn how your comment data is processed.