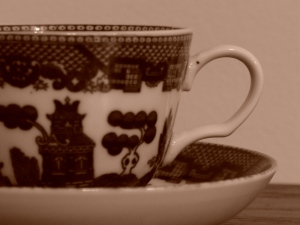 Branching out from my usual trend toward military or related history, I’ve been thinking about tea lately. I am off caffeine and therefore can’t have the lovely dark liquid for a while, so naturally I should choose to write about it.

Much is said about tea these days regarding its health qualities. And for the past few years the idea of an extravagant and elegant afternoon tea has enjoyed a revival of popularity in the U.S. Cute little tea houses have popped up in various places, often only to fold a few months later. It takes marketing genius or a known clientele to get Americans to shake their coffee loving habits.

Although colonial America owes many of its identifying traditions to British norms of the eighteenth century, we did shake loose a few things during the revolution. Tea was one. The Boston Tea Party incident sparked by increased taxes on this most essential of British liquids made a seminal statement. So much so that when you step into a diner the waitress will hand out menus and ask if you want a cup of coffee – you have to ask for tea!

Tea, once upon a time

Don’t get me wrong; I have nothing bad to say about traditional British teatime. It’s lovely and when I visited England I was determined to experience this glorious repast.

In the city of York there is a lovely place called Betty’s Café Tea Rooms. Here you will find the kind of tea service, sandwiches, sweet things, and goodies dreamed about by little girls in frilly dresses. They also serve a pretty swell coronation chicken if you hanker for something more substantial.

For the real deal, tea is prepared with loose leaves in a teapot and strained into your cup. Then a tower of delights arrives at the table. Three layers: warm scones and clotted cream (something I dream of, but rarely can afford stateside), then small open-faced sandwiches conspicuous by the absence of crust and the delicacy of cut, and, finally, a platter of small tarts, lemon curd and raspberry, and other little cakes.

Why is this historic?

Well, at one time people frequently indulged in this colossal teatime repast, but they don’t so much anymore, so participating in such a meal is akin to attending one of those medieval banquet performances, with jousting, and a goofy looking minstrel wandering around playing on a lute. You wouldn’t dine that way every night, but once in a while it gives you first hand experience of a different era of history. Living history.

So have a cup of tea, a scone, and some cake. Live a little… history.

This site uses Akismet to reduce spam. Learn how your comment data is processed.