Narrowing the itinerary, I had decided on four museums. The Bramah Tea and Coffee Museum, the Imperial War Museum, The Churchill War Rooms, and lastly, the grand poobah – The British Museum. 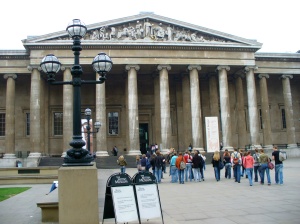 Sadly, on that trip to the UK I had no time for the first three-fourths of the list, but I made it to the British Museum. The edifice is impressive – a wide yard with steps that lead up to a long portico of sturdy, grey columns.

When I think museum, I think a small, well organized place with five or six rooms you can see in a fairly short time. This is not the right impression for the British M. The £2 map you can buy to keep you on track is a maze of room upon room of antiquities.

With only a few hours to see a tiny sampling of what it has to offer, I strolled through the main exhibit hall of Egyptian artifacts (the Rosetta Stone among them) into the Parthenon sculptures and back down the Assyrian hall. I looked in vain for a Scythian exhibit, only to find out it was closed for repair, so I took a short turn in the temporary display of 18th century exploration. I entirely missed the ancient British artifacts, Asian, and African exhibits, among all the rest.

It’s hard to take in the scale of so many ‘things’ housed in the museum complex, but it helps to imagine a very classy warehouse where you can see into most of the boxes. To learn more about the museum, the web address is http://www.britishmuseum.org.

Museums draw you to the past. Coming face to face with an ancient Egyptian carving brings reality to your sense of history – something that looking at a picture in a book cannot do. You may be surprised at how your assumptions are burst by seeing how much smaller or larger a famous artifact is from the way you imagined it would be.

On a related note, there is a continuous debate about the ethics of major European museums keeping ownership of items discovered in other countries (mostly former colonies or protectorates). British, German, and French museums, among others, house some of the seminal pieces representing Africa, Asia, and the Middle East.

Many nations want their items returned, and fairly enough, as they exemplify the cultural history of those places. On the other hand, with the instability, politically and religiously of many nations of origin, some argue that human history is best protected by keeping the items where they have been for the past century or more.

Arguing in favor of this sentiment was the 2001 destruction in Afghanistan of two giant statues of Buddha by Islamic extremists. Likewise the ensuing chaos and devastation of Iraq at war has resulted in the pilfering and destruction of many Assyrian and Babylonian artifacts from Iraqi museums.

Consensus eludes the world on this issue at present, but compromises have been suggested. Returning the originals to their homes, but not before precise copies can be made to remain in place at western museums. Not unlike the copy of the Lascaux caves in France that was made to protect the original from too many respirating tourists.